Sonam Kapoor hit back at Deol by dragging his cousin into the fairness cream debate but deleted the tweet later.

Deol trolled each star in separate Facebook posts. This made him a sensation overnight because no other actor has called out his colleagues for promoting racism even if indirectly by endorsing these fairness creams.

Though none of the artistes shamed reacted to Deol's posts, what Sonam Kapoor did stunned her followers. She dug out a picture of an old fairness cream advertisement of Deol's cousin Esha and shared it on Twitter with the caption, “@AbhayDeol I appreciate and concur with your views and would like to know your thoughts on this as well!” 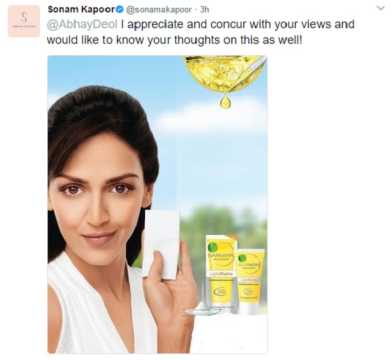 Deol accepted that it, too, was wrong. He replied to Kapoor's tweet with: “Is wrong too. For my views read my post.”

Instead of fuelling the fire, Deol's reply brought peace between the two. At least that's what Kapoor's tweet meant: “Thank you Abhay, I shot this campaign ten years ago and didn't understand the ramifications. Thank you for bringing this to the forefront.”

Deol applauded Kapoor but also reminded her that she can use her star power to highlight the issue. He said, “More power to you @sonamakapoor maybe you can use your power as well to take this further than the forefront.”

But Kapoor continued to get trolled for her post on Esha Deol, making her fire an angry reply to her followers with, “Did anyone bother reading this tweet or just want to troll. I think it’s important to know the whole picture before jumping to conclusions.”

Is wrong too. For my views read my post. https://t.co/Jw9CNINd6t

Kapoor deleted her post on Esha but not before netizens had taken screenshots.

Although it was commendable that Deol brought the issue to light, in all fairness, one can’t ignore that like Sonam Kapoor, a few other artistes too have stopped endorsing fairness creams over the years. These include the likes of Vidya and Shahid Kapoor, who were also mentioned by Abhay Deol. 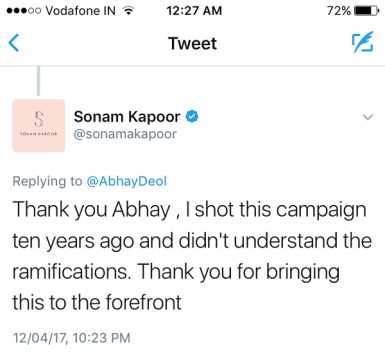