A look at Lal Batti (1957), the only directorial venture of the accomplished actor, on his 44th death anniversary.

Balraj Sahni wore many hats, from radio announcer to writer to actor, but not many know that his sole attempt at direction was with the 1957 thriller set at a railway station, Lal Batti. His co-director on the black and white film was Krishan Chopra who went on to make a handful of films like Heera Moti (1959), Char Diwari (1961) and Gaban (1966). 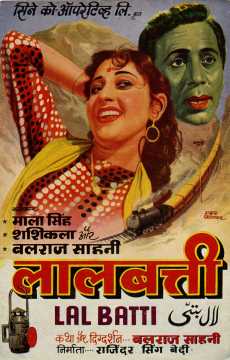 Previously, Balraj Sahni had written the screenplay for Guru Dutt's Baazi (1951), which went on to become a big hit with Dev Anand in the lead. The story of Lal Batti takes place on a Delhi-bound train around the time India became independent. With a star cast featuring Sahni himself, Mala Sinha, Jawahar Kaul, Shashikala, Kamal, Rashid Khan, and Sulochana Devi, the film highlighted the plight of the passengers hoping to embark upon a new life — from a young couple hoping to wed and an English woman fleeing the fallen Raj to a shrewd businessman hoping to capitalize on the promise of a new India.

In a strange twist of fate, the passengers get stranded at a railway station when a vendor pulls the chain when his hat flies off the train. Suddenly, they find themselves engulfed in a murder mystery when the stationmaster is found dead. Sadly, no print of this intriguing film appears to have survived, and only a song or two are available online. The film was largely seen as an exercise in trying something different in Hindi cinema and it appears that the audience did not buy it.

Balraj Sahni also wrote the screenplay for Lal Batti and surrounded himself with a talented crew of friends. Salil Chowdhury was the music composer and the lyrics were penned by Majrooh Sultanpuri, another familiar collaborator. The young editor of Bimal Roy’s Do Bigha Zamin (1953), Hrishikesh Mukherjee, edited Sahni’s first directorial venture. Zohra Sehgal was the choreographer on the film; this was among the handful of Hindi films she choreographed for. Meanwhile, famed writer Rajinder Singh Bedi decided to present Lal Batti himself, one of the few features he produced in his career.