When it is not a direct confrontation, Ram Gopal Varma likes to fire from someone else’s  shoulders. After taking on the head honchos of Phantom Films, Varma trained his guns on action hero Vidyut Jammwal. Varma surprisingly dragged Tiger Shroff into a controversy calling for a Tiger v/s Vidyut street fight.

The Sarkar 3 filmmaker posted a series of tweets mocking Jammwal.

It all started with an action-packed wish with Varma wondering who was the better action hero.

As a martial arts fan am really curious about who's better fighter btwn @iTIGERSHROFF and @VidyutJammwal ..I wish they will fight and prove

It didn’t take long for Varma to call upon Tiger to challenge Jammwal in a street fight.

Varma went on to mock the Commando 2 (2017) actor saying Jammwal had no guts to take on Tiger.

Yes, we are also wondering what 'b s t d e f x s n y' means. Varma even declared that Tiger would finish off Jammwal with just one punch.

The series of tweets failed to evoke a single response from Jammwal, following which Varma stopped his attack.

Both Tiger and Jammwal were sensible enough not to engage Varma. Varma had earlier picked on Tiger, as he tagged father Jackie Shroff and insunuated that Tiger had posed like a gay man. 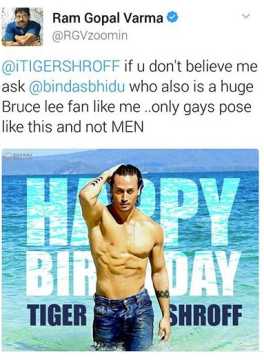 Varma is gearing up for the release of Sarkar 3 which has Jackie playing the antagonist. Tiger didn’t respond to Varma’s criticism earlier, nor did he pay any attention now when Varma is all praises for him.

Just another day of attention-seeking behaviour by Varma on social media.