Begum Akhtar (as Akhtari Fayzabadi) in a still from Roti (1942)

Begum Akhtar's voice and singing expertise led her to bestowed with the title 'Mallika-e-Ghazal'. But before she became the queen of ghazals, she was an actress who performed in a few early talkies like Nal Damayanti (1933), Ameena (1934) and Naseeb Ka Chakkar (1935). But the movie role which defined her movie career was Mehboob Khan's social drama Roti (1942).

Khan pursued her all the way to Lucknow, where she happened to be living at the time. With music by Anil Biswas, the film also featured six ghazals sung by her which aren't available on the film's final cut. Roti, which had anti-bourgeois leanings, was Khan's last movie for an outside production company, National Studios, before setting up shop with his own production house, Mehboob Productions. 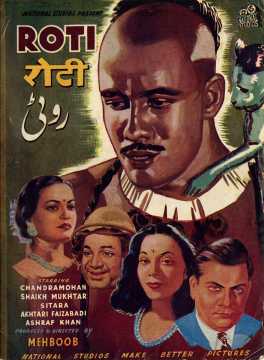 As Akhtari Fayzabadi, she acted opposite Chandramohan, Shaikh Mukhtar and Sitara (the famed dancer on loan from Ranjit Studios). The film highlighted the stark differences between the rich and the poor. Akhtar played Darling, the high-born socialite, who is forced to deal with her father's business associate, a greedy and unscrupulous imposter Laxmidas. Chandramohan was in fine form as the money hungry fiend who will let nothing and no one stand in his way. He controls all the wheat grain in the city and has it hoarded up in his factories, thus exploiting the poor mill workers.

Laxmidas and Darling are stranded in a remote village when their plane crashes. They are rescued by a group of tribals which includes the ideal Balam, played by Shaikh Mukhtar. There she sees them live in harmony from what little they acquire from the land instead of chasing after gold and money. When Laxmidas and Darling require their help to return to the city, Laxmidas cruelly exploits Balam and his love, Kinari, played by Sitara Devi.

Darling is a strong, principled character who rejects the lifestyle she was born into and instead learns from the tribal way of life after she encounters Balam and Kinari. Balam and Kinari suffer greatly in the city before returning back towards their village with their prized bulls, Changu and Mangu. The film's finale, set up Mehboob Khan, shows the two parallels of Balam and Kinari with Laxmidas and Darling proving once and for all that all the gold and money still can't buy them a sip of water or a bite of roti.