Crowdfunded Kejriwal documentary An Insignificant Man is premiered at MAMI


Directed by Khushboo Ranka and Vinay Shukla, the documentary debuted on 23 October at the festival.

An Insignificant Man, which had its world premiere at the Toronto International Film Festival (TIFF) in September, takes us back to 2013 when a seemingly ordinary man, Anand Kejriwal, and a movement of disgruntled citizens banded together to take on the establishment of one of India’s oldest political parties, Congress. The chief minister of Delhi, Sheila Dikshit, had been in power for nearly 15 years with hardly anybody to challenge her. With the growing discord of the non-passage of the anti-corruption bill, a new party emerged to challenge the status quo.

The documentary was crowdfunded (a relatively new term in Indian filmmaking) by nearly 800 people all over India and some outside the country as well. A few donors from the campaign were also present at the screening. Filmmaker Anand Gandhi (Ship of Theseus) is also the executive producer of the film and supported the young filmmakers in their staggering endeavour to capture the political landscape that changed Delhi politics. 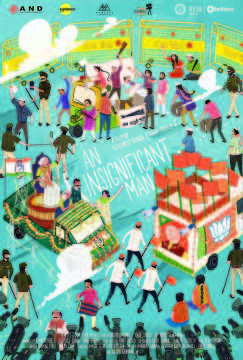 Co-director Khusbhoo Ranka explained in a question and answer session after the screening, “We had no support at all from anywhere. Over time, a lot of people saw rushes and what we were trying to do. A lot of people loved what we were trying to do. Institutional support doesn’t exist and secondly whenever it does exist, we have had experiences where institutions have supported us and withdrawn the support or they’ve relegated us really to the backroom completely. We did a crowdfunding campaign where we got 800 people who are, mostly all of them, complete strangers. There are people from remote parts of India who contributed to our campaign. We have no idea how it even reached them and [how] we managed to raise the most sizeable amount for our film. As filmmakers who are working in complete isolation, it’s a miracle.”

The small crew faced incredible challenges to put together the film. They shoot for over 400 hours to put together a film of 90 minutes and yet they said, they only scratched the surface of what they were trying to cover. The name of the documentary was also changed from A Proposition for a Revolution to An Insignificant Man. Ranka said the filmmakers preferred the second name, “We think it’s more poetic, more open-ended. The first title is a mouthful, so people had trouble remembering it. The term revolution has a lot of specific connotations, some people see it as a violent upheaval of sorts, [while] some people see it as an absolute systemic overhaul. It was really hindering the experience of the film.”

But while the second title suggests a documentary on the man of the moment from 2013, Arvind Kejriwal, the documentary is not just about him. It’s also about the hundreds of volunteers and concerned citizens who came together to form a challenger party, the Aam Aadmi Party (AAP). Yogendra Yadav, an ex-member of AAP, is also a big figure in the documentary.

Despite focusing on the 2013 Delhi elections, the filmmakers said they didn’t have access to certain key members like Anna Hazare and members of the others two political parties, Congress and BJP, which they feel would have added an extra layer to the film. But as co-director Vinay Shukla said, “We wanted to really focus on the politics and the larger ideas. The fights that you’re seeing in the film, [it’s] is a struggle that major political movements across the world are facing. The idea of effective altruism, how much can you achieve in the real world and how much of your idealism can you practice.”

The documentary follows Kejriwal from the campaign trail as he talks to the disenfranchised citizens whose votes he’s hoping to gain. There’s a lot of insight on what goes on behind the scenes during these campaigns — how ads are created to how strategies are formed. Even in these tense and pivotal moments there’s humour to be found. For instance, the representatives from the three parties (Congress, BJP, AAP) bicker onscreen in a television interview, once the cameras are off, they all shake hands as old friends. And even Kejriwal, on the all-important election day, has to answer his mother that yes, he’ll be home by 11 pm.

Shukla explained that nothing was really planned, there were no retakes, as the crew were invisible watchers. “We were shooting the film completely blind and on instinct. So it was literally happening all around us, and it was just all of us, just running all over the city to do whatever we could. We really found the film during the edit process. We wanted to make a film about these people who choose to come into politics around certain ideas and keep it focused around those ideas.”

Executive producer Gandhi said he backed the film and its makers because he was “dying to see cinema that really talks to us. I’m really desperate to see cinema that engages me in a dialogue, that caters to my intellectual curiosity and allows me to participate in a cultural discourse.” He praised Ranka and Shukla and said they inspired him every day and he got a lot to learn from them.

Kejriwal, the man behind the title, is due to watch the film next week. The filmmakers hope to release the film in the country sometime soon.