The classic film was screened at the 18th Mumbai Film Festival on 22 October as part of the celebrations honouring filmmaker Nasir Husain.

Directed by Vijay Anand and written and conceived by Nasir Husain, Teesri Manzil (1966) is one of those iconic Hindi films which everyone knows and loves. The film is also remembered for its groundbreaking music by RD Burman and sublime lyrics by Majrooh Sultanpuri. Then, of course, there is the starcast – Shammi Kapoor, Asha Parekh, Prem Chopra, Premnath and Helen. They all contributed to the film’s grand success.

Teesri Manzil celebrated 50 years of its release in 2016 and the film was screened again at the 18th Mumbai Film Festival on 22 October. The fun-filled screening was a trip down memory lane for many. It was attended by actress Asha Parekh, actor Prem Chopra and many of the family members of the cast and crew who made the film. Shammi Kapoor’s wife Neila Devi and his children, Vijay Anand’s wife, lyricist Sultanpuri’s family, cinematographer Munir Khan’s family, and most of Husain’s children, grandchildren and relatives were in attendance. 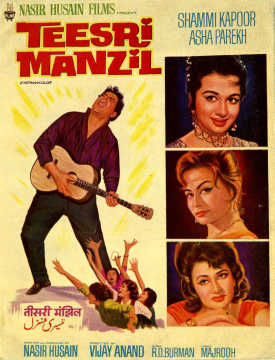 Filmmaker Vikramaditya Motwane was at hand to present Teesri Manzil, his favourite film. He grew up watching Husain’s films in the 1970s but said the film had “the best music for a Hindi commercial cinema”. Motwane also spoke to Asha Parekh before the screening. Teesri Manzil was Parekh’s third collaboration with Husain.

Parekh was launched in Dil Deke Dekho (1959) opposite Shammi Kapoor by Husain. She recalled the “special rapport” she had with the filmmaker. She said making the film was a lovely experience, almost like “going on a picnic".

She talked about shooting the film with director Anand. “Working with Mr Vijay Anand was a pleasure. A director, I feel, par excellence. He was much [ahead of his] time. I remember we were doing [the song] ‘Aaja Aaja’. I had a very bad allergy and the doctors had given me very heavy medicines which made me sleepy. They said they will be taking a few shots here and there and I’ll be able to do it. I went on the stage, it was antara, mukhada and music all in one shot. It was too bad!”

Parekh also revealed that she never guessed the main villain of the film, her reel sister’s murderer, until the mystery was solved in the end. She said even in its 50th year, the film was running fresh and people enjoyed it. Indeed, every song was met by the audience with wolf whistles and cheers, and people clapped to the beat of 'Aaja Aaja’. The banter between Shammi Kapoor and Asha Parekh still made us laugh and the suspense of the central killer looming large in the story held our attention even now.

The film's screening was followed up by the launch of the book, Music Masti Modernity: The Cinema Of Nasir Husain, which is published by HarperCollins India.