On her 95th birth anniversary today (17 November), we look back at a Hindi film actress forgotten by most viewers.

Meena Shorey, née Khurshid Jahan, was one of earliest actresses to excel in comedy. Meena made a successful pairing opposite the actor Motilal. Her biggest hit was Ek Thi Larki (1949) in which the song picturised on her, 'La-ra-lappa La-ra-rappa Lai Rakhada’ became so popular that the name was forever entwined with hers.

Her personal history is murky with scant details about her early life. A Punjabi Muslim, Meena grew up poor and several reports have indicated that she was illiterate. A Filmindia catalogue on the stars of the Indian screen lists her birthday as 17 November 1921 in Ferozepur. Meena came to Mumbai with her elder sister to try her hand at films.

She got her start in Hindi films with a big-time project, Sohrab Modi’s period hit Sikander (1941) where she played the role of Raja Taxila’s sister Prarthana. She signed a contract with Modi’s Minerva Movietone and acted in Phir Milenge (1942), Prithvi Vallabh (1943) and Pattharon Ka Saudagar (1944). However, Modi dragged her to the Bombay high court for allegedly working in an outside film; most likely Shorey never read her contract and eventually the two came upon a mutual monetary settlement.

It was only after she married filmmaker Roop K Shorey that she began to really get noticed for her talent. As it was noted in the February 1949 issue of Filmindia magazine, Roop had “learnt some production tricks in Hollywood within a week” and was “training Meena these days to make her the Rita Hayworth of India.” Roop produced the first Punjabi feature and was quite instrumental in giving breaks to actors and technicians in Lahore.

Ek Thi Larki (1949) became the breakout hit for the two of them in India. With a lively screenplay by IS Johar, Motilal and Meena made quite the onscreen pair in the screwball comedy. The song ‘La-ra-lappa La-ra-rappa Lai Rakhada’ composed by Vinod (also known as Eric Roberts) became one of Lata Mangeshkar’s earliest hit songs. This was around the time when the playback singers were still unknown so Meena's popularity grew as the ‘La-ra-lappa girl'.

For Ek Thi Larki, which was shot in Kashmir, Meena got a role of a lifetime. Johar also debuted as an actor in the film; he played a con man Sohan, who along with his partner Mohan (played by Majnu) recruits Meena to be a part of their crazy schemes. In the madcap comedy, Shorey becomes Motilal’s secretary in his office, despite having no experience, and makes him endure all kinds of wild scenarios in order to escape Sohan and Mohan on a work trip in Delhi.

The long-winded script took the pair to Kashmir where Motilal and Shorey's eventual wedding goes through many obstacles. But the audience bought it and made the film, its stars and music by Vinod into a hit.

Before her marriage to Roop, she was married twice to Zahur Raja in 1941 and co-star Al Nasir in 1943. Both marriages did not last long. She struggled with weight issues throughout her career and the media, especially Filmindia editor Baburao Patel, were sharp to point out her indulgences with sweets and chocolates.

In the 1950s, she went over to Lahore, Pakistan to act in producer JC Anand’s Miss 1956. The film was a complete copy of Mr and Mrs 55 (1955). The success of the Pakistani film prompted her to give a shot to the fledging industry there. Prior to the Partition, her husband Roop’s studio in Lahore had previously burned down and he was forced to come to India. He had no desire to remain in Lahore. 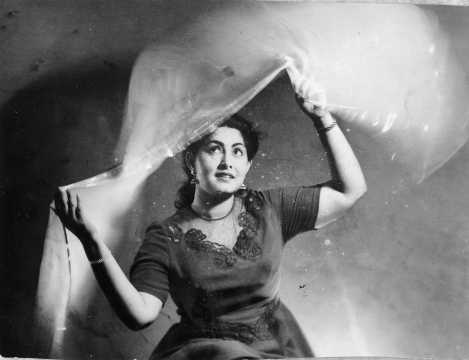 The two separated and Roop left Meena in Lahore. She continued acting in films, but it was nowhere near the fame she had achieved when she was the ‘La-ra-lappa girl’. It is said that when Roop died in 1973, he was still broken-hearted over their separation.

Meena, however, married twice after her separation with Roop to Raza Mir and another co-star Asad Bokhari. The latter two marriages failed as well. And once again, like her early life, the last years of her life were just as obscure. There are varying dates of September 1987 or 1989 noted online for when she passed away.

For someone who always wanted adulation, she died penniless and forgotten in Pakistan — far away from the fame she had achieved as a star in India.