The talented actor from Porbunder, also known as Charlie, became the highest paid comedian of his time.

Charlie Chaplin’s tramp is easily one of the most recognizable comic figures in the world. His on-screen acts transcended age, gender and class barriers. It was no wonder then that Hindi cinema looked West when it needed a comic element in its films.

In its infancy, the Hindi film industry handed over the mantle of comic roles to one man, Noor Mohammad aka Baba Charlie. Filmindia’s Baburao Patel thought of him as India’s only comedian, ‘the others were just tragic plight’. Later on, his version of Charlie Chaplin, complete with the walk, talk and moustache, became so popular that he added the moniker to his name and was called Noor Mohammad Charlie.

Born Noor Mohammad Haji Ahmed on 1 July 1911, he started out in films with Profulla Ghosh’s Akalna Bardan (1928). He adopted the Charlie Chaplin persona in 1933 with the film, Indian Charlie, made by the Elfin Film Company. Then, he joined Ranjit Film Company, where alongside comedians Dixit and Ghory, he began making a name for himself. 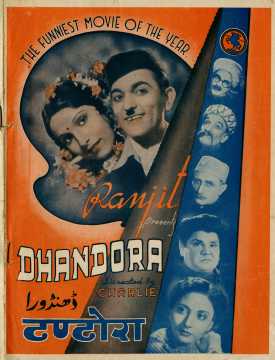 Noor Mohammad Charlie appeared in hits like Barrister’s Wife (1935) and Musafir (1940). In 1941, he directed a film, Dhandhora, which opened to record numbers in its first week. Such was Charlie’s popularity that he even had songs picturised on him, one of the first comedians to have the privilege. He wasn’t just the token comedian there to fill the comedy quotient, the audience wanted more of him as well.

Filmindia’s review of Musafir wrote of his performance, “Charlie...that word is an institution – that name is an affection while that man is perhaps the most lovable freak the Indian screen has ever known. His versatile talent with its numerous facets is a treat to watch. In Musafir he makes the picture a big playground for his tricks and stalks through with the air of a “monarch of all I survey.” 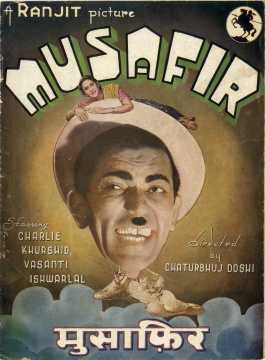 He began singing comic songs like ‘Jab Se Mali Teri Khak’ from Thokar (1939) and gave hits like ‘Zindagi Hai Fareb’ from Chand Tara (1945). He was no slouch when it came to singing, performing duets opposite Amirbai Karnataki and Suraiya. These comedic songs greatly influenced later comedians Johny Walker and Mehmood.

Not only was Noor Mohammad the first comedian to sing songs, he was also the first to take a catchphrase and turn it into a hit song. In the film Sanjog (1943), where he was cast opposite Mehtab, he is found singing, “Palat! Tera dhyan kidhar hai?”, decades before Varun Dhawan popularised it in a song in Main Tera Hero (2014).

However, since many of those wonderful films were lost in the fire that consumed the Ranjit Film Company’s vault, we aren’t witness to Charlie’s many talents. There are a few gems, like Sanjog and Taqdeer (1943), that remain. After Partition, Charlie moved to Pakistan and made around a dozen films. In 1960, he came back to India to act in a few films. Fittingly, his last film, Akeli Mat Jaiyo (1963), was also the final Ranjit production. He was denied citizenship by the government of India and migrated to USA where he died on 30 June 1983.