In a country divided by language and dialects, Priyadarshan has managed to generate grudging respect among filmmakers for his ability to bridge the North-South divide.

The language of cinema transcends boundaries. The visual medium enables a fluent conversation between the story and its audience despite the limitations of language. Yet, it would be a step too far to discount the effect of language on successful storytelling. This fact makes Priyadarshan's rise as a commercially successful director all the more mysterious.

Starting out in 1984, Priyadarshan has directed more than 80 films in Tamil, Malayalam and Hindi. His Hindi films alone exceed the number of 30, astonishing for a director who turned to the language only in the 1990s. In an industry that is ferociously protective of language loyalties, success on both sides of the North-South divide makes Priyadarshan a one-off.

In the days of yore, when cinema was a far more unifying force than the financial feudal empire it is today, artists and technicians would cross the language divide with ease. K Raghavendra Rao, Ravikant Nagaich and K Vishwanath were among the few names who crossed to the upper Deccan with success. Vyjayanthimala, Kamal Hassan, Rajinikanth, and Sridevi had already paved the way for actors from the South.

Although Priyadarshan arrived in 1991 with Muskurahat, he had to wait until the release of Virasat (1997) for his first big break. Till then, the Southern phenomenon had already taken hold with Mani Ratnam, Rajiv Menon, AR Rahman as recognised names. Priyadarshan though surpassed them with his long list of blockbuster hits. Starting from Virasat in 1997, he delivered Hera Pheri (2000), Hulchul (2004), Hungama (2003), Bhagam Bhaag (2006), Bhool Bhulaiyaa (2007) and Billu (2009). Each of them mass entertainers and blockbusters.

The process of a Priyadarshan hit is fairly simple. He borrows the storyline of a hit South Indian film, his own or some other, rewrites the script in Hindi and shoots it.

In an interview online, he admits: " write in Malayalam, then translate it into English. Then the dialogue writer adapts it. I always go home to Chennai. I hate Bombay. Unless there is a studio location, I always shoot outside Bombay."

Take Virasat as an example. The story was borrowed from Kamal Hassan-Sivaji Ganesan hit Thevar Magan 91992), which kickstarted the trend of sickle-bearing village heroes in Tamil cinema where the Tamil version has an exact geographical setting, down to the setting in Pollachi.

Priyadarshan utilises suspension of disbelief to convince audiences that the same sets and location are a part of the UP heartlands. The film works because of the raw emotions of vengeance, loyalty, and tradition than the factors of authenticity, research and realism which fuelled its original version. It also marks his tendency to repeat actors he matches wavelengths with. Amrish Puri and Anil Kapoor were both part of the director's earlier film, Gardish (1993). Priyadarshan continued this practice by signing Akshay Kumar, Akshay Khanna, Paresh Rawal, Jackie Shroff, Suniel Shetty and Om Puri in films that followed one another.

Linguistic differences often weigh heavy on directors, more than actors. Mani Ratnam is famously apprehensive of the process of re-shooting a regional language film into Hindi. His masterpieces Roja (1992) and Bombay (1995) were both dubbed, not reshot. His first Hindi language experiment, Dil Se... (1998), made a delayed impact on its audiences, nullifying any chances of it being described as a 'hit' at the box office.

An instinctive filmmaker, Ratnam describes the difficulty as limiting, because "you can't go totally by the instinct because once you have finished the shot, you can't move on to the next. You have to do the same thing in the other language'. It is understandable. Priyadarshan bypasses this problem by simply reducing a film to its basics — the actors and their enactment of the script in a different language. It is basically a play carried on into a different language and setting, quite similar to staging Hamlet in Hindi or Marathi. The ethos doesn't matter, the emotions and the characters do. It does not always work. Films like Mere Baap Pehle Aap (2008), De Dana Dan (2009), Ye Teraa Ghar Ye Meraa Ghar (2001), Kyon Ki... (2005), Chup Chupke (2006) are examples of being lost in translation. The script does not always work when taken out of its original locales."

Hera Pheri was Priyadarshan's biggest success. With Akshay Kumar, Paresh Rawal, Suniel Shetty, the director scripted a mad hat comedy that had people mouthing its lines a decade after its release. 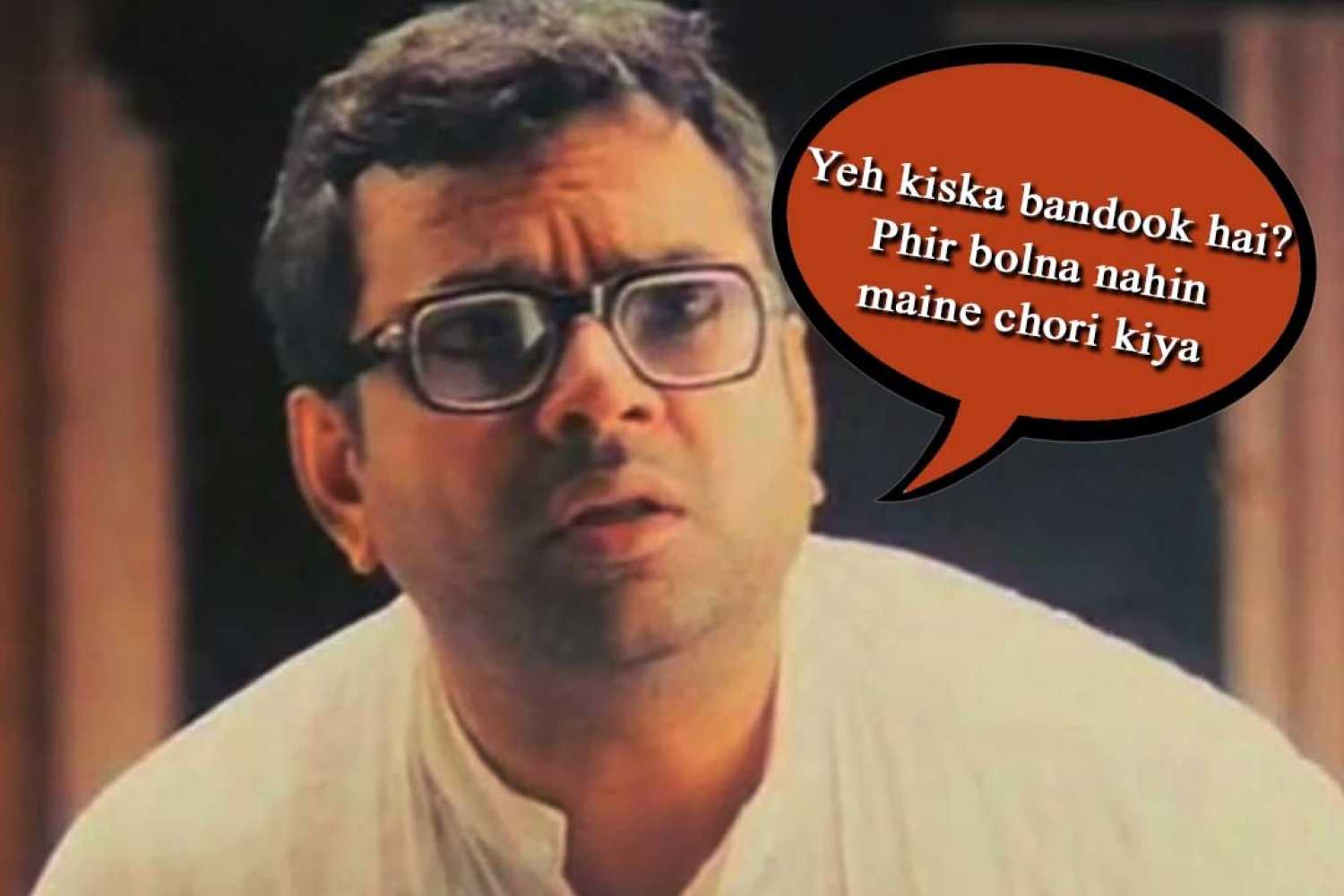 Paresh Rawal's Baburao Ganpatrao Apte became a meme and an icon. Even this was a remake of a 1989 Malayalam hit Ramjirao Speaking. The success of the film can only be set down to the pitch-perfect tone of the Marathi landlord that Rawal adapts. The use of a 'Mumbaiyya' Hindi throughout the film and its urban settings made it instantly appealing to a Hindi film loving audience. It gelled with the situational comedy of the film. His subsequent comedies like Hulchul (2004), Hungama (2003), Garam Masala (2005) were all works of translation, but did not quite capture the tone like Hera Pheri (2000) did.

Priyadarshan's next biggest hit arrived in Bhool Bhulaiyaa (2007). The film again had Priyadarshan regulars like Akshay, Rawal and Om. It was a remake of a Malayalam hit Manachitrathazhu, and again had the urban logical Indian in an irrational, superstitious village. It proved to be a blockbuster hit, establishing Akshay s the new King of Bollywood, temporarily. The success here had nothing to do with the language, but everything to do with the suspense, intrigue and situational comedy of the script.

In an era of southern remakes, Priyadarshan remains the man who started it all. His rapid filmmaking style, armed with complete scripts and borrowed storylines, make him one of the most successful South Indian filmmakers in the Hindi film industry. He has managed to reach out to audiences on both sides of the Vindhyas with repeated success. The filmmaker and poet, Gulzar, said in an interview: "We're passing through a phase where a new zabaan, a new language is prominent which is the visual language. It is being heavily explored and it doesn't let you think anything else." By that definition, Priyadarshan is on the right track.