On the 41st death anniversary of Vasant Desai, we look at his incredible achievements during a career spread over four decades.

Born on 9 June 1912 in Sonawade in modern-day Satara district of Maharashtra, the young Vasant Desai was active in three fields — music, acting and bodybuilding. He only studied up to Class IV but kept observing and imbibing from the creative folks at Prabhat Studios, Kolhapur, which he joined as a teenager.

Desai's association with his mentor, the filmmaker V Shantaram, was highly fruitful and he produced instant hits on soundtracks for films like Dr Kotnis Ki Amar Kahani (1946) and Do Ankhen Barah Haath (1957). His masterpiece, of course, was Jhanak Jhanak Payal Baaje (1955) in which he composed classical tunes in the dance-themed film.

Desai never quite received his due during his lifetime. Other musicians like C Ramchandra and Naushad Ali were far more popular in those days. But the power of his compositions remains till today. His score for later films Aashirwaad (1968) with ‘Rail Gaadi’ and Guddi (1970) with ‘Bole Re Papihara’ are still recalled after all these years. Vasant Desai passed away on 22 December 1975 after a freak accident in a lift at his home.

1. At 16, Vasant Desai joined the nascent film studio, Prabhat, in Kolhapur as Shantaram’s unpaid office boy where he toiled away for a year before being transferred to the acting department. He later went on to have a small role in the silent film Khooni Kanjar (1930). Shantaram finally started him off on a salary of Rs7 a month.

3. When Prabhat Studios moved to Pune in 1933, Desai reluctantly relocated as well. He continued to aid various departments at Prabhat where a large number of films were being made. Desai had roles in Prabhat films like Maya Machindra (1932), Amrit Manthan (1934) and Dharmatma (1935).

4. Desai was to play the lead in Shantaram’s iconic Marathi film Manoos (1939) opposite Shanta Hublikar. He successfully auditioned for the film but he was later replaced by the newcomer Shahu Modak. After this rejection, Desai focused his energies on music. 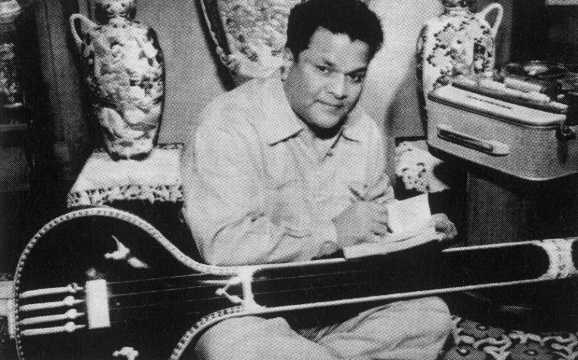 5. During the 1930s, Vasant Desai composed music for a few Marathi films but never received any credit for his work. His first official Marathi film was Lok Shahir Ram Joshi (1947). Five years earlier, he had got credit as an independent music composer with Wadia Movietone’s Shobha (1942) starring Shobhana Samarth.

6. Vasant Desai’s compositions travelled to the Cannes film festival twice, once in 1952 and again in 1956. The first time was for Shantaram’s Marathi film Amar Bhupali (1951) starring Lalita Pawar and Sandhya and the second time for documentary filmmaker Fali Bilimoria’s short film Growing Coconuts. Both films were in competition at the festival.

9. In an interview with Simi Garewal, actress-turned-politician Jayalalithaa Jayaram had revealed that Desai’s composition of ‘Aye Malik Tere Bande Hum’ was one of her favourite songs. She recently passed away after a lengthy illness on 5 December. The prayer plea was sung by Mangeshkar and is still considered one of her best renditions. 'Aye Malik Tere Bande Hum' was declared the official prayer in all Punjab schools at the time.